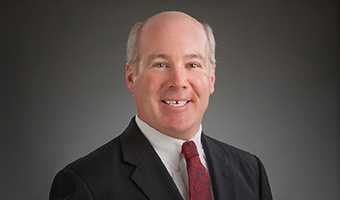 Legal Teams Leader -
Government Compliance and Investigations
(716) 200-5120
tflynn@harrisbeach.com
Linkedin
Twitter
“I enjoy guiding a client, either a corporation or individual, facing a complex internal and/or external matter and seeing that client succeed in resolving the matter in a way that allows them to prosper.”
Profile
Representative Matters
Professional and Civic
Areas of Experience
Admissions
Education
Location
Publications and Events

Terry is the Chairman of the Harris Beach Compensation Committee.

Terry is a former presidentially appointed United States Attorney for the Western District of New York. He represents businesses and individuals across industries in both civil and criminal government investigations which include conducting internal corporate probes and independent monitorships.

Terry also litigates on behalf of a diverse array of clients among the Fortune 50 and large privately held companies, including Walmart, Facebook, United Technologies, United/Continental Airlines, Westlake Chemical Corporation, Skyryse, UBS Financial Services and the Buffalo Sabres, in such areas as commercial litigation, product liability and personal injury litigation, and government compliance. Terry’s representation of United Technologies resulted in Harris Beach being acknowledged among the Go-To Law Firms® for 2014 in Contracts Litigation as published in Corporate Counsel magazine.

Prior to joining Harris Beach, Terry served as the United States Attorney for the Western District of New York from March 2006 to January 2009. In that capacity, he was the chief civil lawyer and criminal prosecutor for the United States and all of its agencies in the 17 county region of the Western District of New York. He oversaw the management of two offices (Buffalo and Rochester) with more than 130 personnel, including 57 attorneys. Specifically, he was responsible for the overall civil affirmative enforcement, civil defense and criminal prosecution of approximately 4,200 cases, encompassing such areas as government compliance/independent monitor, health care fraud, commercial litigation, international trade, white collar fraud, bankruptcy and numerous other civil and criminal matters. During his tenure, the U.S. Attorney's Office for the Western District of New York recovered on behalf of taxpayers over $124 million through both affirmative civil and criminal enforcement of fraud against the U.S. Government.

Prior to his confirmation as the United States Attorney, Terry was a trial lawyer who litigated and tried cases throughout New York state, including the New York City metropolitan area. He represented numerous Fortune 100 and 500 corporations, including, but not limited to, General Motors, Toyota, Ford, Chrysler, Raytheon, Black & Decker, Hertz and Westinghouse.

State University of New York at Buffalo School of Law

COVID 19-driven scrutiny from regulators and investigators could put long-term care facilities at risk of having their operating certificate
June 12, 2020

Municipalities in New York State should be ready to respond to an increased amount of Freedom of Information Law (“FOIL”) requests as a resu
June 3, 2020

The Department of Justice has provided further guidance on what they will be looking for in assessing corporate compliance programs. The lat
June 2, 2020

As widely reported, Gov. Cuomo has asked the state Department of Health and Attorney General Letitia James to conduct an investigation of th
April 22, 2020

U.S. Attorney General William Barr has ordered all United States Attorneys to establish task forces in their districts to investigate and pr
April 20, 2020

U.S. Attorney General William Barr has ordered all United States Attorneys to establish task forces in their districts to investigate and pr
April 1, 2020

How to Manage a Crisis

No one likes to envision bad things happening. But developing a crisis management plan is arguably the single most important responsibility
January 27, 2020

Governor Cuomo’s plan to reform Medicaid has given local governments, municipalities and healthcare providers a little glimpse into how he p
September 5, 2019